Rosie and I have now arrived in Umea for the OO Cup after a flight to Stockholm and six hour train ride up the Swedish coastline. Considering the awful stories and reports in the media concerning the chaos of flying at the moment and with BA cancelling our original flight quite recently necessitating some urgent and desperate rebooking by Rosie, Heathrow wasn’t too bad on the day apart from an acute and obvious understaffing in security causing some chaos and delay. Our flight was eventually only about 20mins late departing and arrived on schedule despite having to take two attempts on landing due to a problem on the plane landing ahead of ours
Umea is the largest and is the capital city in Norrland with a large university creating a vibrant student based city culture with lots of good food places and bars
We are staying in a hostel type accommodation in central Umea and using the bus services provided by the event organisation for transport to and from the events each day
The first event, a medium distance, is later this afternoon
( this far north it does not get dark at night this time of year). We’ll plan to provide a daily blog as the week progresses so more later…
Andy 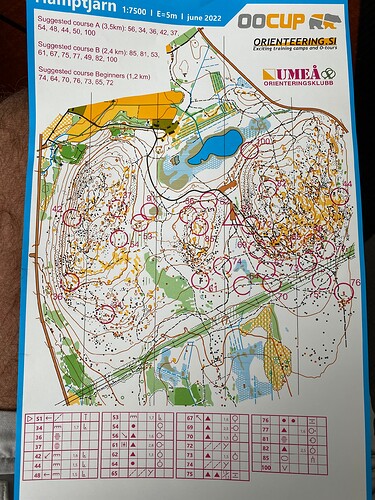 Day1: later start to allow people to get here- about 1200 from all over Europe- back to mornings for the rest of the week
So to our first event on Scandi terrain… and my gosh it’s hard- very technical as you would expect but also really tough physically- loads of boulders and crags of all sizes some clean others mossy and unmapped but all with treacherous holes between them and many requiring advanced rock climbing skills to get past. Paths were virtually non existent and where they did, were difficult to discern owing to the thick heather and other rubbish- of course the Scandinavians ( of all ages and both sexes ) bomb over the terrain like it’s an easy urban
So my ‘easy’
warm up first day event of 4.1km took me 90 minutes( and I wasn’t last!) with a winning time of about 40- Rosie fared even worse coming in just under 2 hours for her 2.7km😊!!
Things can hopefully only 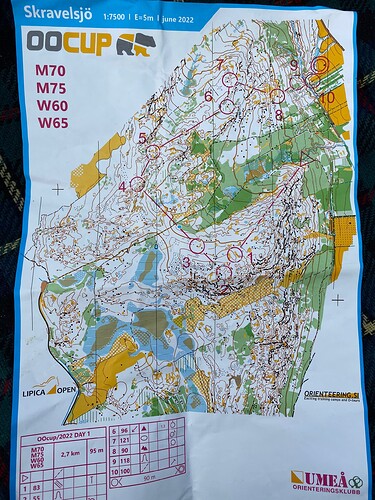 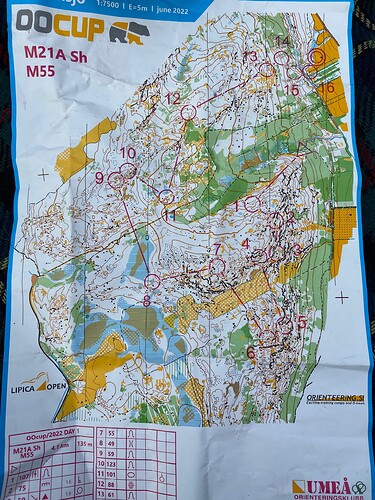 Bright sunshine from 4am hopefully was an optimistic start to Day 2. Well fuelled by a waffle breakfast at the hostel we took our regular stroll to catch the bus at 8.50 - all the bus passengers are in the same early start block. This was fortunate yesterday as I began to wonder if I would return from my lengthy outing before the bus departure!
Day 2 was a long event on a new map and sections of fast running were promised. In the event it turned into another testing event over even more complex terrain. Covering the ground presented a physical challenge and trying to match map features to all manner of boulders, knolls ( actually mossy boulders) and cliffs tested the grey matter. My verdict after Day 1 was that I couldn’t get any worse - at least I succeeded there. Almost a third of the competitors in my age class have already mis-punched or retired; which perhaps says something. At least I wasn’t last today and had the small victory of being first back to base from the QO/ Devon contingent. Andy Reynolds and Rimes are in the same age group and pretty well matched so far. Alison Reynolds and I are neck and neck in the competition for the longest leg - both with 38 minutes to a first control.
If you are wondering what one does for the rest of the day - the answer is recover ready to face it all again… Scandinavian orienteering is certainly in another league.
Rosie 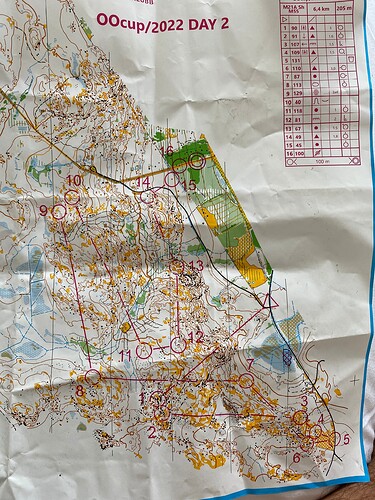 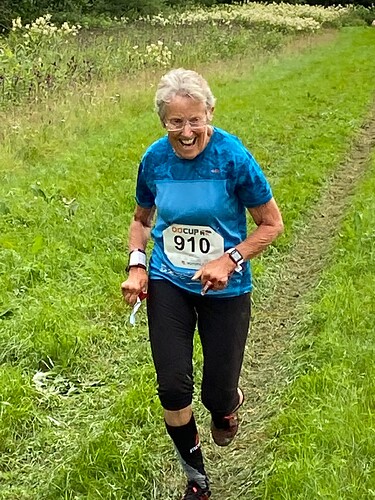 A much more difficult blog for me personally to write for day#3 as I performed abysmally, couldn’t interpret the map at all at times, got well lost at one point and therefore generally hated the whole experience. The area was based in a different part of the same forest as day#2 but was much more complex (really?), more hills and of course no line or catching/reorientation features if one blew it- and blew it I certainly did: control#1 250m - couldn’t find it. After floundering for 15 mins, came back to the start and tried again- 21 mins for 250m and already in a relatively foul mood. The terrain is really tough physically and very difficult to maintain a straight bearing led line so the good orienteers ( basically all the Scandinavians who do this every weekend) pick off the point features as they go along and arrive at the control- sounds so easy.
My first control set the theme for the first half of the course- every one causing problems and ridiculously long splits each time. Things did slowly improve but by now this was rather academic and it became a battle of willpower and grim determination to just finish as the event is based on the cumulative time for all five days- any mispunch or retiral immediately gets you a disqualification from the entire event. I did therefore eventually finish with an appallingly long time of 160 mins ( for 4.5km course length!) and was somewhat consoled by the fact that even that horrendous result didn’t put me quite in last place.
Of course my three travelling companions all had relatively good days today and tried their best not to sound too patronising with their comments when I eventually re-appeared back at the download.
Oh dear… and so to tomorrow then…
Andy 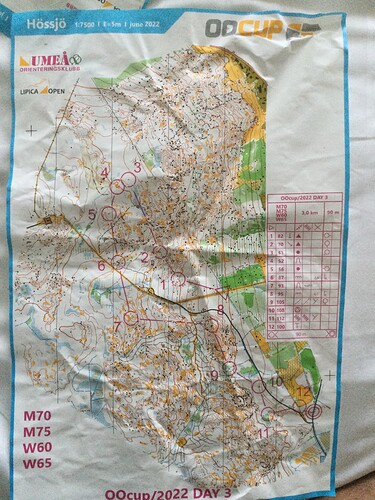 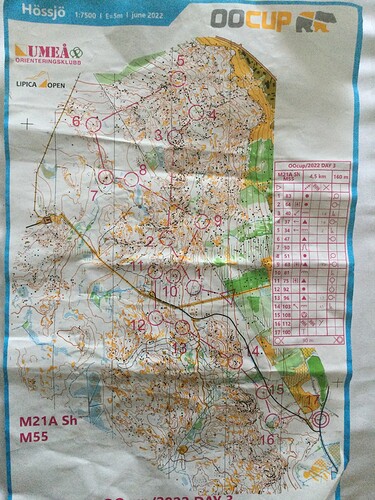 Andy’s map… didn’t do quite so well

Day#4 and#5
Sorry for the delayed update ( in case this rubbish is actually being read by anyone out there?) but we went out for the rest of the day and evening after yesterday’s event so no time to post until now on returning from today’s final event.
So day#4 was a long event (Andy’s M55 course 6.4km and 140m) on a “fast and runnable” terrain with marshy flat sections separating more technical hilly areas with the usual ( by now) masses of rock and contour features. For me the whole thing went much better by maintaining contact with the map almost at all times but with the very unusual ( by local terrain standards) of having some more obvious line and area features to confirm and/or relocate to if required.
I noticed while crossing one extensive marshy area that the marsh was covered in hundreds of small ground level plants with what looked like raspberry fruits on them- only later on commenting about them to our friends Andy and Alison ( who know the Arctic area well as they have a summer home in Finnish Lapland) that these were in fact not quite ripe cloudberries- a rare and treasured arctic delicacy- such a shame then that I must have crushed and destroyed many in my haste to cross said marsh.
The orienteering was actually by comparison very easy compared to the previous days by being less technical and physical so it was actually possible to enjoy being out in the beautiful forest for once in (almost) total control- of course all the others on your course also found the going easy so the results were typical - successful completion of course but down near the bottom once again. However one or two adversaries each day would typically mispunch and be eliminated so as long as you finished each day successfully by default you would typically creep upwards in the standings. 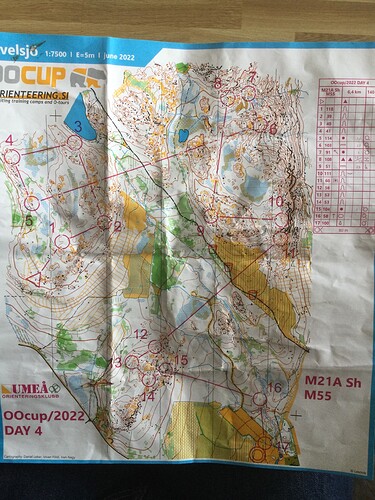 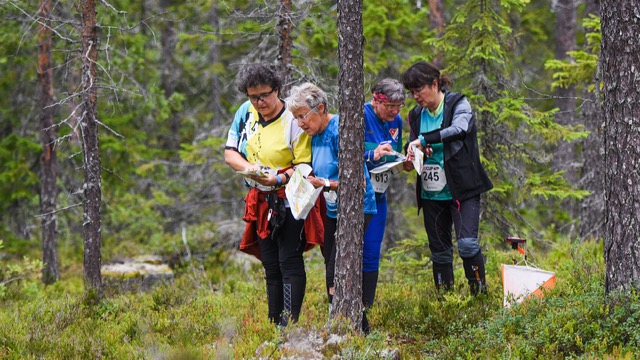 Day#5- final day ( medium event) on terrain just outside Umeå previously used for the Swedish medium distance national champs… and what an area! The organisers certainly saved the best till last- in the north of the map lies Klabberget a highly detailed rock covered hill with very detailed contour changes where loss of contact with the map could be horrendous with virtually nothing to relocate to unless you went a long way off the hill. My course had my first six controls on the hill and fortunately after a shaky start (12 mins for a 200m leg) went generally well. At this stage in the competition I was in a friendly daily rivalry between Andy and a French guy we had met and was at about our standard. Andy had started first of the three of us, followed by Jean Luc at +4mins then me at +8mins. Due to my error on control#1 I thought it was game over for me but was comforted to find my French adversary also searching desperately for the first control- we eventually found it together and hurried off on our separate routes. Leg#2 was a very difficult long contour across multiple parallel rock terraces strewn with boulders and reentrants- I slowed the pace and knew I was close to the site, resigned now that both adversaries were long gone. I found the control and was just approaching it as the two of them appeared from a very wrong direction working together and both mightily relieved to find it. We separated again and I didnt see them again until about 3/4 way round the course where I had made a poor route choice on a long leg and compounded that decision by wandering off the line through grotty terrain and landing too low down the hillside… to meet them careering down from the control as I sweated my way up the climb to it

Again I thought all was lost until literally at the penultimate control before exiting the forest I encountered them both again as I was leaving the control downhill with them now facing the short climb up to the control. Spurred by the situation I stumbled and fell my way down the grotty descent to the clean open area to the final collecting control and finish- a great finale to a really good event. 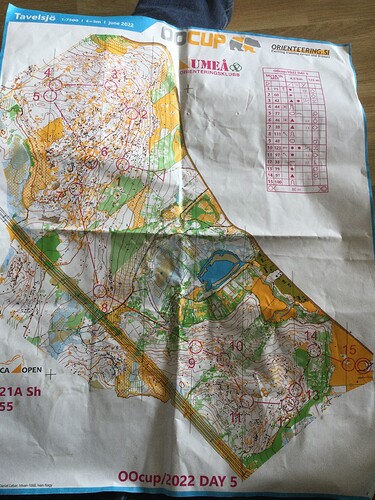 Summary:
This was our third oocup- the previous ones being in France and Slovenia( the organising team’s home country) and all have been wonderfully organised, cheap ( by horrendous UK major event standards) to enter and on excellent areas using very high standard maps. It’s not too daunting to be there whatever your standard or ability as each day there are not so competitive open classes as well as the standard age classes in short and long variants- the competition usually attracts about 1000 to 1500 entries so is not too huge but still attractive to better orienteers from all over Europe and further so one can get the opportunity to compete with (and against!) them. Of course this year the entry field was dominated by competitors from the Scandinavian countries who are obviously extremely used to this terrain and who inevitably dominated the results in all classes. The few brits that did compete, including us, were generally just pleased to get through each day successfully and almost invariably came at the bottom of the results tables- but that’s not the point- this is holiday orienteering at its best, offering a chance to visit a new area, meet new and old friends, and compete in a friendly way in beautiful surroundings.
We have really enjoyed our trip over here- yes it is expensive and with the current travelling situation not that easy to do, but always worth the effort involved.
Next year (pandemics and travel chaos permitting) the event moves back to Slovenia to the classic very technical karst ( limestone features) terrain. Slovenia is a beautiful country and still relatively inexpensive to get to. We hope to be going if it doesn’t clash with other plans and commitments- does anyone fancy joining us…?

Thanks for sharing this @andyr and Rosie - I really enjoyed reading the write-ups each day.

How did you and @AndyRey get on overall?

A massive congratulations to everyone for finishing the event with such tricky terrain - I think I would still be out there now!

Interesting that you found the areas better as the week went by but to me all the maps look incredibly intricate, maybe you were getting your eyes in? Great reports and certainly tempting for Slovenia.