How did it go? Having planned it, I had fun watching the results coming in. I’ll have to go through and check/amend anywhere the GPS didn’t register, but it looks like it made for a wide spread of scores. And, as I’d hoped, very few people took similar paths or even chose the same controls.

Here’s the map for reference… 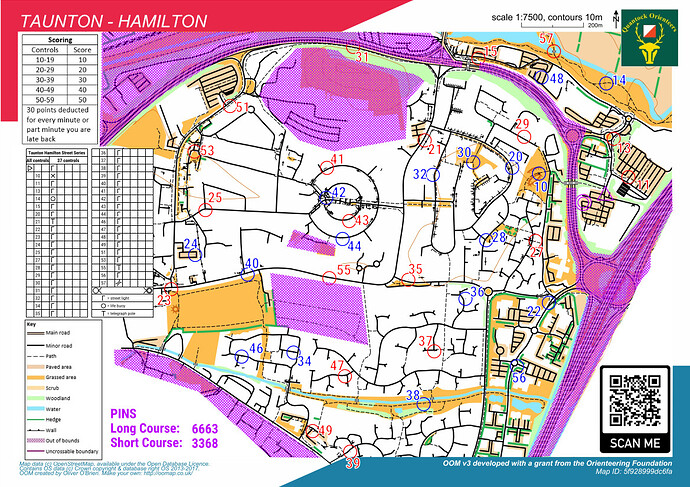 Sorry didn’t log a result as my phone died at control 30 and Annabel had forgotten to download the maprun app so came with me !

The control descriptions were a bit small and I’m not sure if my phone registered the signal on the lamp-post or the pelican crossing on control 11 ? but we tracked a route (on red first) collecting controls 13, 57, 15 towards the cinema, crossed the footbridge and run towards outer circle (the footpath at control 21 was closed-off with high fencing, so had to run along the busy road to get a signal), then headed towards Asda (or control 51,53 etc) before switching to blues at Hamilton Park and turned around and ran back through outer circle and controls 42, 44 , towards Hankridge footbridge and controls 32, 30, 20, 10. We had fun, running over 7.5km, Thanks for planning. Angela.

That’s annoying about control 21. When I checked a few days before, they were working nearer the dual carriageway junction but 21 was clear.

The CDs issue is an interesting one. There seems to be polarisation between those who want every control listed explicitly and those who just want ‘all are lamposts apart from…’
What do the people on here prefer?

lamppost are contentious when they are in clusters and running in parallel along the roads - unless the CD’s say which side of the road to go I’m zig zagging across roads and in front of cars !!

I understand the size is reduced to fit the map but could you produce separate, larger loose CD’s which a runner could print from the website if desired - being long sighted has its drawbacks so any help is appreciated,

Pyrland JOG
Control 41 didn’t bleep so stopped my run !
Is there a problem ??

I ran up and down the fence/passed the bend a few times before quitting as it didn’t leave me enough time to get back to the finish without incurring a time penalty. Maybe I’ll try again another day,

It is something that causes me issues, too. I did put a dot in the centre of the control circle to show which side of the road the control was on, but it is very small.

I understand the size is reduced to fit the map but could you produce separate, larger loose CD’s which a runner could print from the website if desired - being long sighted has its drawbacks so any help is appreciated

That is something we can look at again. The last one I planned, I think only one person took a lose CD sheet.
Putting N, S etc on the CD could be done - we’d have to make it clear it referred to side of the road not the traditional’ northern in a cluster’ meaning.

Pyrland JOG
Control 41 didn’t bleep so stopped my run !
Is there a problem ??

Sometimes the GPS signal goes wrong, particularly with trees or tall buildings nearby. Sometimes the control is in the wrong place (though it was checked by the planner in this case).
I always advise that after a quick check that you are in the right place, go on. As the MapRun administrator, I go through everyone’s GPS traces after the event and award ones where they were obviously in the right place but for whatever reason the GPS didn’t trigger the punch.

Checking and reinstating routes is what I did on the events I was the Maprun admin. Unfortunately, there is one case where the ‘miss it out and carry on running’ approach might not appeal to the runner and that’s when the runner’s trying to string together reds or blues or miss ones of the wrong colour. Of course, the runners’ points could still be reinstated but it’d take some nerve on the runners’ part!