The Quantock Challenge - a long score course across the Quantocks planned by Alasdair, finished yesterday.

How did everyone find it?

@craddocktaunton 's review is available to read on the club website: Review of the Second Quantocks Challenge - Quantock Orienteers

Here is my write up:

Due to holidays, the only chance I had to take part was on Saturday morning. I sat in the car waiting for the heavy rain to finish before accepting moderate rain as a sufficient improvement (the rain finally stopped after 2 hours and the sun came out just as I got back to the car).

My plan was an anti-clockwise loop covering the top 2/3 of the course with a few optional controls, and a backup loop at the end I could leave if I ran out of time.

Like Roger, I skipped 28 at the start to avoid a climb at the start and went straight to 39 - my route from there to 29 was a bit off and I hit a patch of rougher undergrowth - ferns and hidden prickles. Enough to put me off trying the direct rough route to 48! I am kicking myself now seeing how others used the short route along the fence to pick up the faint path that flows to the control - instead, I climbed up, decided to go and get 14 (literally the one control I was guaranteed to run past later) losing a few precious minutes, then took the wrong path and had to drop down the re-entrant to get to the right place. Not a great start.

From there though things settled down a bit and I had no issues as I looped via 24 back up to the top - I left 47 for the return route but did 65 → 77 → 58 to minimise the height gain, before flowing past 37 along the track to 55. Looking back at my official track my GPS was clearly struggling and I spent a few minutes wandering about trying to get the ping (it had to be added later after a review). This knocked my confidence a bit and again I wasted a bit of time with the wrong distinct tree before correcting and relocating.

Things finally clicked for the high point controls - I took the opportunity of the steep climb from 76 to refuel (apricots and nuts) but otherwise, my legs felt good despite having already run a good distance.

My favourite bit of the whole course was down in the valley splashing through the river to get 67 and 57, although the slog up to 74 was troublesome (another re-fuel opportunity).

And then I make my big mistake…

In my head, the penalty for being late was 10 points per minute so, based on the time I had left, it seemed a sensible risk to go and get 46 on my way to the finish. How I ever thought a 2km slog on tired legs was sensible is a matter for debate and inevitably my legs gave up and it was pure hell to get back to the finish - ultimately 4 minutes late with a 120 penalty.

It is not lost on me that I could have just gone up to the trig point to get 28 instead and I would have been 100 points richer. Still - I am still new at this!

Thanks to Alisdair for planning the course - it was a lot of fun, although I am glad it is only once per year (once adjusted the distance covered was still a half marathon!) 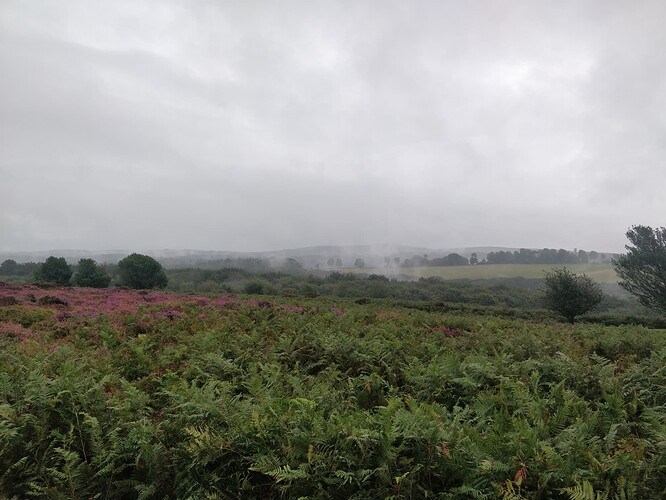 Glad you enjoyed it.
Last year I figured I’d made it hard enough that no-one would get all the controls. Then someone averaged over 10km/hr for 5hrs and got them all. So this year I got more fiendish with control placement to force extra climbs on those trying for top scores. Sadly that also made it harder for the control checking team (me, Bill and Roger).

Just done another attempt, post-QC dates, to try a different route choice. At the speeds I’m limited to I’m never going to get near all the controls. Bit off slightly too much in the middle ( and in chatting to a tourist who wanted confirmation the island he could see ( Steep Holm) was Lundy!!) so missed several easy controls in trying to get round in-time. Had Strava running too and it and MapRun disn’t agree on elapsed time- Strava records ‘on the move’ I think… Glorious heather and lots of butterflies. When I’ve recovered hope to try another variation!

I need to sort my tech out for these kinds of runs - I had my TomTom watch on stopwatch mode as I do not trust the ‘active time’ if I record the run, and as I do not entirely trust the MapRun app, I had another app recording the route (which might have caused my spikes).

So this year I got more fiendish with control placement to force extra climbs on those trying for top scores. Sadly that also made it harder for the control checking team (me, Bill and Roger).

It definitely made for interesting route choices @alasdair.shaw working out if the climbs are worth it. Thanks to the control checkers as well - that must have taken a few trips out to cover everything.