After having a go at a few of the stages from the two previous Lockdown Orienteering events, I have decided to bite the bullet and step up to have a go at the actual full event.

It costs £10 (or £5 for kids) (the Catching Feature stages which needs software are optional but they give you a 40% discount code).

Find out more and try some of the stages from previous events at https://lockdownorienteering.wordpress.com/

Entries close at the end of Tuesday 5th May.

I’m going to have a go at the sudoku with control features, Angela

They have a club team competition later in May: https://lockdownorienteering.wordpress.com/team-competition-entry/

I really enjoyed it, so I thought, in case anyone finds it interesting, that I would write up how I got on.

I think you can still have a go at most of the stages and see the answers at https://lockdownorienteering.com/classic-weekend-may-2020/

Stage 1 was Forest Route Choice - this involved picking which route was fastest between two controls from an actual race (the winning route or routes was based on the fastest times of competitors who chose that particular route). For example from JK 2018: 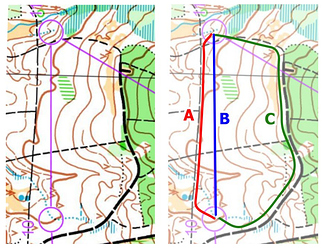 Greenshot 2020-05-11 20.04.28964×740 298 KB
You need to answer correctly within 5 seconds for maximum points and you also get more points guessing the wrong answer in less than 5 seconds rather than thinking about it for longer than 15 seconds. I suppose this is like real orienteering where you need to make a route choice quickly under pressure but it did lead me to trust my dodgy instinct more than I would like resulting in an average score.

Stage 2 was Catching Features Short - if you have not played Catching Features before it is like an orienteering simulator. In some ways it is very much like orienteering - I particularly like how you keep in contact with the map as you navigate between the controls ticking off the features which are super clear with even green area boundaries being very obvious (unlike say gorse on the Quantocks!). It can also be frustrating when you end up on a boulder and your runner gets stuck and goes super slow. It is also very easy to follow a compass bearing which lead me to more direct routes irrespective of the terrain. This course was from a forest in South Africa and was a lot of fun. I finished in a (speeded up) time of 71:05 (the winner finished in 30:11!) - a result I was happy with given my aim was just to finish!

Stage 3 was Spot the Difference. Whilst I was fine with the ‘what has changed?’ or ‘what has been added?’ questions, with hindsight I should have slowed down a bit and spent more time checking for all the differences when it was questions like ‘how many areas of green have gone?’. Only 6 out of 10 correct.

This last question was cruel with ‘nothing’ as an option - even now I know the correct answer I still cannot see it! 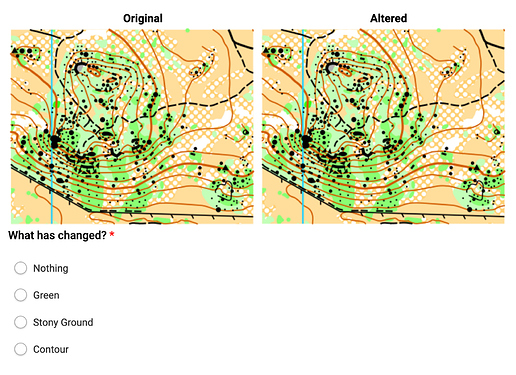 Greenshot 2020-05-11 20.24.331650×1198 630 KB
Stage 4 was Control Description Game - matching control symbols to map symbols in several combinations. In practice games I did ok in this, but when it came to it I got all the various water based symbols mixed up - lakes, ponds, wells, waterholes, springs, steams which meant lots of mistakes which impacted on my final score.

Stage 5 was Video Orienteering - you are given three route options for a leg. Once you have chosen your route, you get to watch a video of a runner following your route and your time is the time it took them to compete it. As there were no time pressures, we did this as a family activity which the kids enjoyed. The videos were interesting, but we started skipped them halfway through. Looking at the results there were only really seconds between most of the routes which meant as amateurs we were not doing much more than guessing.

Stage 6 was Catching Features Middle - this time a mountain in Scotland with added trees. Again my goal was just to finish, and there were a few hairy moments were I struggled to relocated after getting lost overrunning controls.

Stage 7 was Laby: The Maze - this is a retro maze game with orienteering controls. 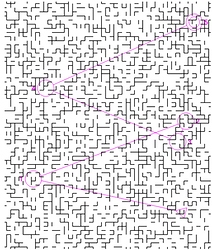 EXkJeU6X0AE0M7m1542×1818 244 KB
It turns out that all those years spent as a kid navigating around dungeons in Bards Tale on my Amstrad CPC 6128 finally paid off and, other than a worrying moment when I lost my place on the way to control 4 (relocating is really hard!), I really enjoyed this stage. It was my 2nd best stage finishing 110th in 662:69 (the winner somehow finished in 180.73 which is bonkers fast!)

Stage 8 was Up or Down - deciding if a leg involves going up, down, up then down or down then up. I was terrible at this although it seems so simple when it was being explained later in the live show! Basically you are looking for tiny contour markers or cliffs (or if you are lucky rivers) to work it out. I was not last (just).

Stage 9 was Photo Memory O - on the first screen you get a map of a control (and an arrow marking your approach angle), then on the second screen you get four photos of controls and you need to identify the matching photo, e.g. 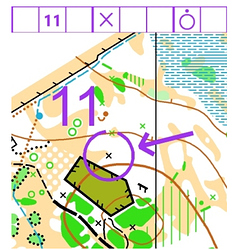 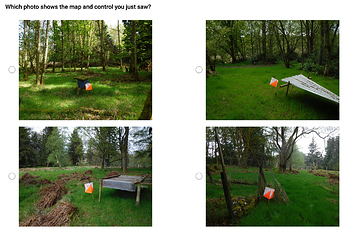 After my Up or Down disaster, things went much better on this stage getting all the answers correct albeit not as fast as 44 other people. My best stage.

Stage 10 was Catching Features Long - again back in South Africa. With such long legs it was not possible to stick with the comfortable ‘following the compass direct’ tactic on earlier stages, and instead you were forced to start navigating more using features (and paths). It was surprisingly tiring concentrating for so long but eventually I brough my runner home in a time of 163:28 (again speeded up). 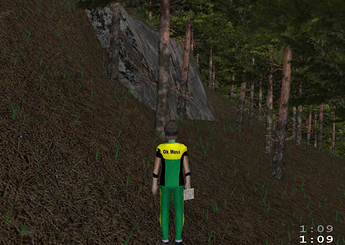 Overall I came a respectable 154th - there are some definate areas I can improve on (like Up or Down) or practice more (like Control Descriptions). Ultimately you need to play Catching Features to get better at the game and I am not sure how willing I am to commit any time to that! 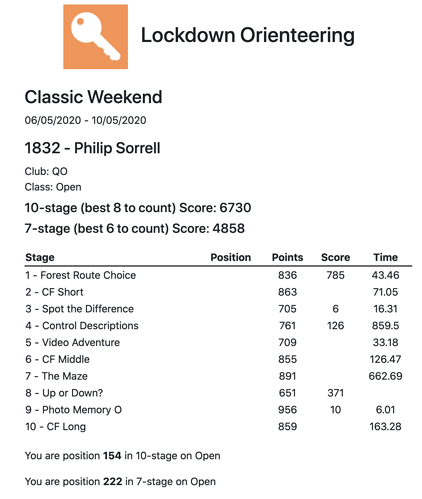 A massive thank you to the organisers who put on a well organised and fun event (I really enjoyed the final live show watching world class orienteers fail to spot the uncrossable wall that requires a huge diversion to get past!!).

Coming up they have:

Well done, you beat me convincingly. 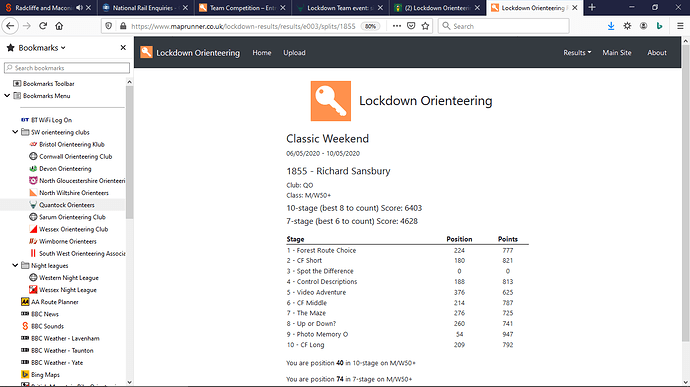 image1366×768 62.7 KB
My worst round was spot the difference, where I seem to have misunderstood the instructions so badly I only got zero score. Maybe I only did the practice game.
daylightgambler 17 May 2020 19:47 #6

Just goes to show it does not equate to real orienteering! The Laby and Catching Features, whilst utilising O skills, are definitely games where practice seems to make a big difference (or a misspent youth playing computer games!)

Shame about the spot the difference round - in many ways the most time consuming round.