The next Quantock Orienteering league event is on 9th January at Buckland Wood - a classic forest event in the Blackdowns planned by Richard Sansbury.

Pre-entry closes on 7th January, so do not forget to enter!

Hello all. Yes I am your planner for the upcoming QOFL - the first we have had for some time, and I hope you are looking forward to it. We have all the usual courses from white to blue and all is set for a full scale forest event. Now I know Buckland Wood isn’t everyone’s top choice location and it will be slippery and brambly in places, but there are also open runnable parts and I have done my best to keep the courses in the best places. So if you keep on course, you will be fine. Hope you enjoy it!

So if you keep on course, you will be fine.

Urgh that is me in the brambles again then!!

Seriously though, I am not sure I have run at Buckland Wood before so looking forward to it

Just looking back at the course from 2014 and very much enjoying @BrianJP 's route choices, especially at the start. Before looking, I wondered if the longer path route between 2-3 was an option, and you executed it nicely.

How did everyone get on?
Results and Routegadget link now on the event page…

Thanks, yes I had longer path routes in the back of mind before picking up the map today. A different flavour for todays courses though pretty much ruling out using paths to traverse the jungle like terrain. I felt we were kept in the best parts using a middle distance race plan and it certainly worked for me. i managed not to need the machete although between 20 and 21 I found a few dead ends and was thinking I should have gone around. Glad to be back out again for my first proper run since isolating with covid- probably the toughest 4km I can remember.

‘Jungle’ describes it nicely @BrianJP. Overall I enjoyed it despite tough terrain with the hills, brambles, mud and steep slopes - I only lost a shoe twice and fell over at least 3 times!

It was nice to have a few easier controls at the start (thanks @RichardS), although I was briefly distracted by a lost child! I got a bit confused at control 4, but then had a good run to control 12. After that… it fell apart - with minor errors or hesitancies for most of the rest of the course. I definitely need to practice jungle compass work!

The kids both enjoyed getting covered in mud on their course. Just a bit of feedback for future events: they have both been trained to never cross fences, walls or roads unless they are completely sure it is an allowed crossing (to stop them straying too far from the course). Both of them got to the locked gate (which was their crossing point) and assumed it was not the correct route. For scenarios like this, can locked (or otherwise unclear) gates be marked with a smiley face (or mentioned at the start) to prevent confusion?

When I chose Buckland Wood for our early January QOFL, I thought this would be a small scale event with a modest turn-out as per previous annual patterns. However I could not have known that due to cancellations this would become the first QOFL for some time. Also I did not expect so many from BOK to make the trip. All very welcome of course, but if I knew we would sell out I might have suggested a better venue!

Yes, the overall plan was to keep runners to the best parts of the jungle/wood, hence a coiled up blue course, middle-distance style. You might be grateful for me keeping clear of the western parts of the wood, now that really would have been soggy!

Fair criticism about the locked gates, it had occurred to me a few days ago that I should brief competitors about this but then I forgot on the day. And in fact there were no animals in there today. Hope this didn’t hold the kids up for too long.

Yes, the overall plan was to keep runners to the best parts of the jungle/wood, hence a coiled up blue course, middle-distance style. You might be grateful for me keeping clear of the western parts of the wood, now that really would have been soggy!

Looking back at my route, I can certainly blame my poor route choices and navigation for the worst of jungle. There were definately clearer routes!

North scarp of the Blackdowns is not my favourite type of terrain. I plead age and infirmity- I knew in advance that for me the slopes, ground cover and jungle would make it hard, but was glad to get round Green at all. My route makes a lovely babe-in-the-woods zigzag round the ‘tower’! Getting back up to the finish nearly killed me. Thanks to all- planners/helpers. 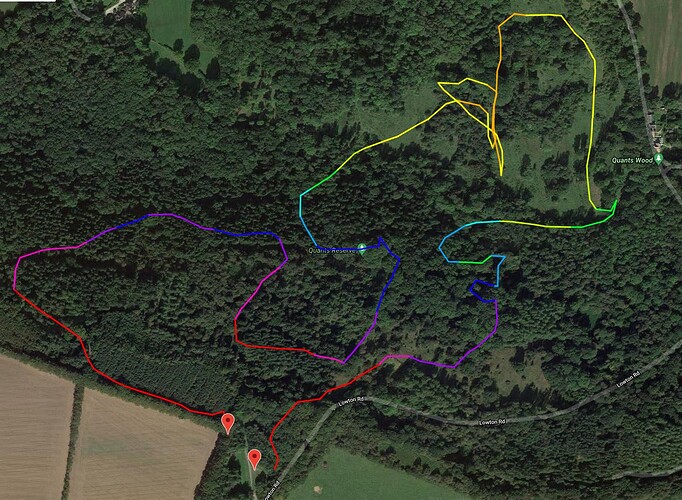 A post was split to a new topic: QOFL league standings updated after two events