A lovely summer-like day on Wind Down - it was practically roasting on Broomfield Hill for those that made it across the road, although thankfully cooler in the woods - for the club’s championships.

Reply to this topic to share how you got on and whether your plan worked (or in my case failed terribly).

Massive thanks to @Annabel1995 who planned a fantastic puzzle to try and solve. I am looking forward to seeing the results. Also thanks to organisers @craddocktaunton and Judy, and all the other helpers.

I am never really sure what the best way to approach score courses like this is - especially with the added complication of only being allowed to collect controls in ascending 10s order.

As 112 was near the start, I decided to collect a few 10s heading towards Broomfield Hill before switching to 20s when it seemed sensible. This led me via 111 and 114 to 118 before heading to 124. With hindsight 124 should be easy - the dark green vegetation was obvious, but only after I had mistaken lesser vegetation and went off course losing a few precious minutes. Out on the hot hillside, I grabbed 128 and headed down to 125 - my navigation was fine, but I choose a poor lengthy route to 120, again wasting time, before sticking with 20s to 123 and 121.

By now I was well over half time - I grabbed 137 before the long and tiring run to 134 (thankfully easy to glimpse from the path). 131 should have been easier, but rather than taking the (now) obvious open area between the vegetation, I choose to fight through the vegetation along the earth bank. I continued along the path around to 132 and pushed through to 145. Now out of time, I hit the hill… it was a slog up to the assembly area before sweeping around via 143 and the slightly scary run down to the finish… 5:13 late

Looking back, I think heading across the road was a red herring for me - ultimately only giving me 70 points for quite a bit of time and effort. I suspect I should have also switched to 30s and 40s sooner as well (and come in on time!)

Still it was a fun puzzle to try and work out and it was lovely to be out orienteering again!

I fed back to the planners that I thought the scoring system they chose meant that they only really needed to use Wind Down to get an hour’s score suitable for all runners.
QO summer/ early Autumn events have often plagued by undergrowth and incredibly long times for the short distances involved, but Wind Down seemed to be surprisingly runnable in places. So credit to the planners for choosing that venue and finding some very nice control locations.
By the way, I think you comfortably beat me, Phil! Glad you enjoyed your run

I messed up big time. I must have somehow stopped my watch partway round. I thought I was back about a minute over but come download it turned out to be over 5 minutes! Add in just not being able to run much - no idea why unless it was the heat - and it was a poor score.
But, most importantly, it was a lot of fun.

First look at the map and I couldn’t see a clear way to get high marks just going for high ones like I’d hoped. I reckoned the distance between 4 10s was less than getting a 30.
So, my plan. A sweep round getting 10s and 20s without getting too low down, then grab stuff at Broomfield and dash back, catching the 40 near the finish.

I fed back to the planners that I thought the scoring system they chose meant that they only really needed to use Wind Down to get an hour’s score suitable for all runners.

Although to be fair all the top scorers (pre handicap) did make it across the road - some making more efficient use of the controls than others (the latter for me!) so maybe it a better option than it seemed.

but Wind Down seemed to be surprisingly runnable in places

Agree - there were some good runnable areas and quite a few little tracks through the brambles although my routes were fairly conservative. I see you did 132 to 134 - was that cutting through direct?

By the way, I think you comfortably beat me, Phil!

Until that last hill, my legs felt good, but we will see how I fare on a full course - other than two urbans in the Midlands, my next event is the long-distance championships…

I must have somehow stopped my watch partway round.

Does anyone know if the course will be on RouteGadget?

I’ve never known a score course to ever be posted to RG. From my point of view, I’ve been saved a great indignity. Especially folks seeing my route from 132 to 134- was too lazy to read Control Descriptions and vainly hunted down a non-existent root stock.

Great event thankyou. I started with my normal score attitude of get them all and started planning ahead whilist scooping up some 10s but became apparent quickly I needed to think much harder about when to make th switches between score and what to leave out. In the end stayed on the 10s too long which could have netted me a few more, should have left 118 and picked up 120 as a minimum but could have left 114 and 111 and picked up 126, 129 and 123.
Kept telling myself decending to the finish from 143 with only a few seconds to go that it wasnt worth face planting to the forest road from 15 ft to save 10 points !
My Strava route is here
7.3 km Run Activity on September 4, 2021 by Mark S. on Strava 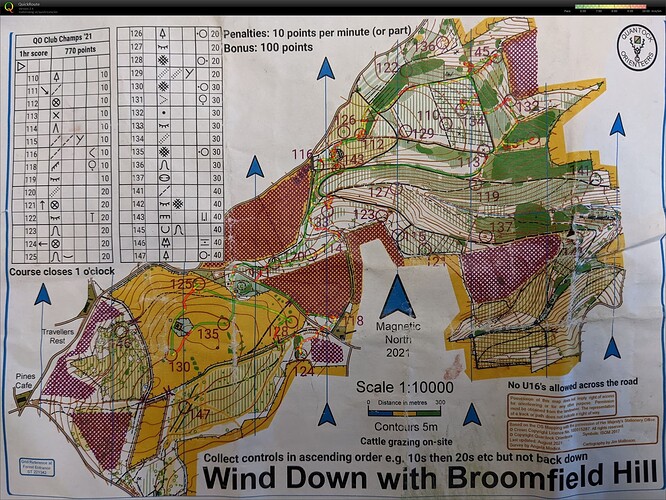 Welcome to the chat site @stodge.

Sounds like our tactics were similar - it is so tempting to go for everything especially when there is a bonus, but in reality, there is no chance!

Are the colours on your route on your map your speed? How did you put it together?

Colour coding is speed (configurable) done in ‘quickroute’ using gpx export from Strava and a photo of the map.
I could do a learning session on race analysis one evening midweek somewhere if people are interested

Colour coding is speed (configurable) done in ‘quickroute’ using gpx export from Strava and a photo of the map.

I will have a play with that

I would be interested in that - although I am still in the ‘make better choices’ and ‘get fitter running up hills’ stage of my orienteering!

That would be brilliant! Thank you. We’ll have to try to set something up.
In the meantime, would you be interested in putting together a little article or video for the website?